After spending 4 wonderful days in Tucson, it’s hard to get back into the swing of “real life” 😉 So I’m finally finding some time to share my race report!  First off, I’d just like to say how awesome it is to not only be back in the racing scene, but also to be racing in such a great town with so many awesome competitors!  It had crossed my mind that I didn’t need to compete at Nationals this year, having already secured my slot for the World Championship in France based on my 2011 ranking.  However I quickly remembered that 1) I needed to redeem myself after last year’s race, and 2) why would I want to pass up racing in AZ?!?  The weather in Tucson is perfect, the people are super-friendly, the course is amazing, and the views are breath-taking.  What more can you ask for?

My first day training on the course was Thursday, and BOY was it windy!  Riding in my aerobars was next to impossible, and I even had a hard time taking a hand off the bars to shft at times.  I could only hope that it wouldn’t be quite as windy on race day, and my wish came true.  I arrived at transition Saturday morning with perfect conditions!  After getting my bike set up, we were cleared out of transition by 8:00 for the first wave to start. My wave wasn’t until 8:45, which left a lot of time for the nerves to build up while watching the other races unfold!  Finally our time arrived and I lined up at the front of the pack with some fierce-looking runners!  Gail Kattouf was the only one I recognized, but we all wished each other luck before the starting horn sounded. 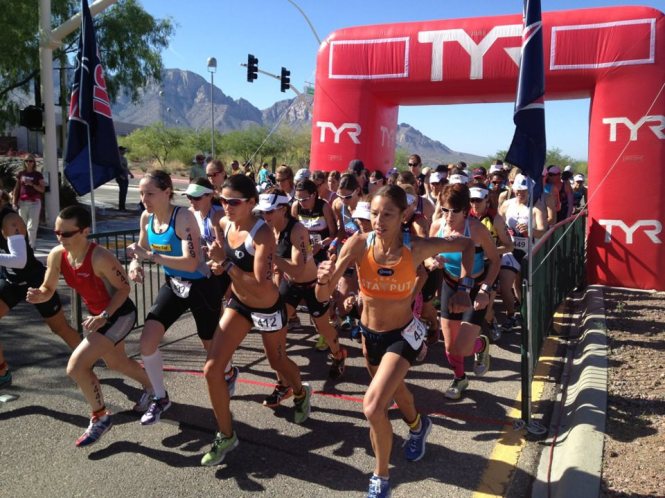 49 and under Female Start

We went off at a blistering pace, and I quickly secured a position in 4th place.  I hit the first mile at 5:34, which was a little faster than I had planned, but no one else appeared to be slowing down, so I just went with it!  The female who was in the lead was being passed by the other 2 women ahead of me, so I figured I better follow suit.  I passed her at the 2nd turn-around, and held my position in 3rd up the infamous hill into T1.  I had a super-fast transition, and was 2nd out on the bike.  Of course it wasn’t long before power-cyclist Gail Kattouf came flying by me like I was stopping to admire a cactus on the side of the road!  It took me a couple of miles to get my legs feeling like they had any power in them, which has been a frustration this season!  On the first lap of the bike I was passed by another female in my wave, but also saw the the female who was in first drop out of the race.  So this kept my in 3rd, and I just focused on a steady effort and not letting too many more women pass me!  On the second lap Nike Matanza passed me looking real strong.  At this point I realized I had some work to do on the 2nd run!  I held my spot through the 2nd lap of the bike, and came into T2, still in 4th place.

After another quick transition, I headed out on the 2nd run and my legs were happy to be off the bike!  I was able to get back into 3rd place, and was feeling pretty good!  I hit mile 2 at a time of 12:30, and was preparing for that final climb to the finish… I swear that thing feels longer each time!  What a sense of relief when you make the turn off the road towards the finish line!

Even though I was the 3rd female across the finish line from my wave, it turns out that a woman in the 50-54 age group, who started at 8, edged me out by :22 seconds!  Lesson learned – never forget about the women who do not start in your wave!  World-class runner Ellen Hart secured the 3rd spot on the podium – and what an honor it is to be racing with a legend!  My final standing was 4th overall, and 2nd in the 35-39 age group. 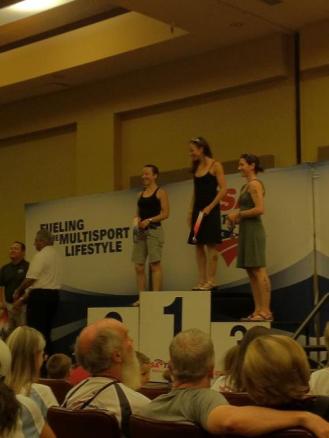 The awards ceremony is always great – getting to see so many accomplished athletes and reuniting with so many friends! I was also happy to learn that I got the award for the fastest combined run time – a Trigger Point kit! 🙂 Not only did it have a vital piece I was missing, but I also seemed to have left my TP ball in Tucson… I guess my run training is coming along well – now it’s time to work on the bike!  I am re-evaluating my position on the bike – I think I’ve lost a lot of power with the position I’m in currently.  Stay tuned…