As I eased back into racing last year, I decided that this year I would get back to triathlon.  Then I realized that it was the end of June and I have yet to do one!  Something needed to be done 😉  So last Sunday I got on the computer to see if there was anything local, and was happy to find a small sprint tri in Smyrna, DE.  A sprint – yikes – I had to look back on my results to find that the last time I did a sprint tri was the Musselman Mini in July of 2005!  As many of you know, I’m much more interested in the longer races.  My swim is…well…not up to par – to put it nicely.  So I rely on the longer bike and run to make up for it!  However today’s 1/4 mile swim was what I needed, especially since I’ve only done 2 swims since my crash at the beginning of the month.  One on Wednesday was 10 minutes in a lake – simply to see if my old, ragged wet suit would hold up.  The second was Thursday – a 20 min swim in the pool just to get my body to remember what to do!  Signing up for this race was also a way to remind me that I need to focus more on my swimming…

Turns out my wet suit practice swim wasn’t necessary, since the water temp was 80.  Normally this would evoke feelings of distress in me, but I was fine with it.  With a swim that short I would rather not have to deal with it anyway.  That’s something I never thought I’d say!  I got in for a very short warm-up swim, before I realized we were going to be delayed half an hour, but was feeling pretty calm.  Thanks to the nasty storms that passed through the area the previous night, the race crew had quite the task of rebuilding the transition, and making the course safe enough to race on.  What a great job they did – no one was going to complain about the slight delay!

I wasn’t expecting to have a “good” swim, but I really didn’t want my first swim in 3 years (to the month) to be a total failure.  So I decided to focus on staying calm and swimming steady.  And it worked!  It probably had a lot to do with the fact that it was so short, but I was able to stay calm and smooth throughout (although not fast), and it was a real boost.  Time to hop on the bike and play catch up.  Of course I had no idea how many women were in front of me, and with duathletes on the course before us that made it even tougher.  So I just rode and hoped for the best!  A HUGE thanks to Gretna Bikes for the awesome rental HED wheels to help me out on the bike – they were great!! 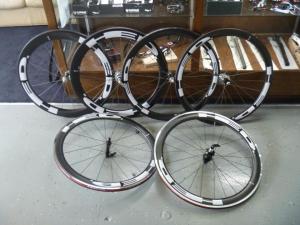 Coming into T2 I was once again stuck behind someone who was in no hurry to move through the transition, but this wasn’t the kind of race where you get impatient over something like this.  I embraced the delay and even took a few seconds to wipe some sand off my feet before slipping on my run shoes.  These definitely weren’t fast transitions for me 😉  Heading out on the run I really noticed the heat, and even though I drank a lot on the bike, I was looking forward to the water stops!  I still had no idea where I was position-wise, but soon enough I saw a female ahead of me who I was sure did the tri.  She looked fast and strong, so I figured there couldn’t be many, if any, women ahead of her.  I was anxious to catch her and pass her, but cautioned myself to be patient – I didn’t want to work so hard and catch her only to burn out in the last mile.  Thank you Suzanne for keeping me running scared – awesome racing today!

On to what you’ve been waiting for…the unique award!  I LOVE LOVE LOVE crazy awards!  I think this one might just miss the podium of my favorites, but it definitely wins the award for the biggest and definitely the heaviest, weighing in at 37.4 pounds.  I actually think my back is sore, not from the race, but from carrying the thing to my car!  I should have recruited a young, strapping male to carry it for me 😉 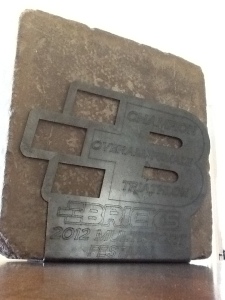 I’m not sure what to do with my brick – I’m open to suggestions 😉  But it’s definitely cool!