Sunday morning I was awoken by my alarm at 5:15 am. I felt the effects of the previous day’s events hitting me pretty hard and thought an extra hour or two of sleep would be just the cure. But with as many excuses people were giving me to bag today’s race, I was not about to back out due to a little too much partying. What can I say – it’s October in PA! I had my breakfast of 1 banana, and 2 pinole-chia muffins, and settled onto the couch to get whatever additional rest I could before heading to Blue Marsh Lake for my first 50k.

Arriving at the race site it seemed like a perfect day for the race. The temps were warm but not too warm, and the overcast skies appeared to be keeping the heat we were promised at bay for the time-being. Overall I felt a sense of calm. This time there was no pressure – I was not being urged to beat a certain set of twins, or anyone for that matter. I was in brand new territory. I hadn’t run over 20 miles since 2007, and have never run longer than a marathon distance. I also never prepared a training plan for this event. I figured my body could handle the distance – I just wasn’t sure how well and at what speed. Time to find out! I had set an aggressive goal of 4:15, putting me at about an 8:12 pace. Let’s face it, pressure aside, I still wanted to win, and this was the time I decided I needed to obtain that win.

The First 10 miles
I lined up in the front at the start line – even though I didn’t know what I was in for I just can’t help myself. I figured I’d follow the flow since there were surely others up front who knew what they were doing. I was happy with the relaxed pace at which we started, and when I looked down to see that it was 6:27 I was even happier to feel that this pace was easy. Before long we were onto the trails and I settled in behind 2 guys. After the first mile I had every urge to pass them at this relaxed pace, but actually exercised some common sense and decided that there was no reason to go my usual “balls out” at this point. I told myself for the first of many times that day “it’s going to be a LONG day.” I was very conservative on any uphill sections, and equally careful on the descents, actually allowing a gap to form in an attempt to save my quads for the later stages. I was feeling very confident during these first 10 miles, and my average pace was 7:29. Great start to the day!

The Second 10 miles
At about mile 10 we turned into a very familiar area to me – cutting behind my old stomping grounds at Blue Marsh Ski Area. That’s when we were greeted with a 19.8% climb that quickly reduced my pace. The trails on this course were not very technical, but the prior day’s heavy rains late in the evening ensured that the trails were blanketed in wet leaves. I decided to race in my inov-8 Trailroc 150’s, and I made the perfect choice for these trails and conditions. Did I really forget how much I loved this shoe? I fell in love with them all over again. For my first time running this distance it sure was a relief to not even notice my feet! I appreciated the light-weight minimalist feel over the miles. The contoured fit kept my foot snug in place so there was no friction or hot spots. And the aggressive outsole provided excellent traction over the varied terrain throughout the course. Whether descending on dry loose trails or climbing up the slick leaf-covered hills they provided me with the perfect amount of grip to keep me confident, and upright 🙂

During those 2nd ten miles I realized that this was going to turn into a race of survival for me. My pace average slowed to 9:01 over this section and I had a feeling it was only going to get tougher. At this point I was mostly alone, and although I was enjoying some beautiful views and scenery, I was wishing I had some company. One competitor and I had been going back and forth through the whole race. At about mile 15 I stopped to tie my shoe and he stopped to introduce himself as Mike and shake my hand. This felt so odd to me to do during a race, but I had to remind myself that we were only nearing the halfway point and still had a long way to go! I was happy to have made a new friend on that lonely day!

The Last 11 miles
The aid stations along the course are part of what makes this event a huge success. Not only are they stocked with any kind of fun fuel your heart could desire, but the volunteers are all runners themselves so they know the deal. To top it off, they have a competition for best aid station, so you know they are going above and beyond to make your race an enjoyable one! As the day wore on I found it harder to pick my favorite – each one I arrived at was a welcome distraction to my mounting exhaustion. I think the later aid stations had the advantage because the more tired you were, the more excited you were to see them! At every aid station throughout the day I grabbed 2 cups of water – 1 to dump over me and one to drink. I had 64 ounces of water in my pack, but with the climbing heat and humidity I wanted to save that. At 3 of the later stations I was even drinking Gatorade – I felt those wonderful salt crusties on my face and figured I better start replacing some electrolytes.

During these last 11 miles I couldn’t help but think I was going to be passed. I had led from the start and as usual had no clue how large my gap was. As welcoming as the aid stations were, I was hoping that there weren’t many left. Whomever was chasing me had the advantage of hearing how far ahead I was at every stop – how I was looking, etc. If she knew she had been closing the gap on me, and that I was hurting and slowing down, this could fuel her race. I had to push these thoughts out of my head and press on.

My goal earlier in the race was to hit the halfway point just under 2 hours. I missed that mark by 5 minutes, and now realized that my initial goal of 4:15 was far out of reach. I changed it to 4:30. My pace for the last 11 miles had slowed to 9:42. I had a mysterious pain in my right knee which was causing me to slow down and alter my stride on each descent, where this late in the race I should’ve been using them to my advantage. I was fading fast as the final miles seemed to drag on forever. With about 2.5 miles to go my calves started seizing and even the smallest incline felt like a mountain. I realized that in my stubbornness I only took in enough nutrition for 4 hours of racing – like only eating that much would somehow make me run faster to finish in a time that wouldn’t warrant one last gel 😉

Then I did what you never do. I looked back. Not once or twice, but at least 10 times during those last 2 miles. I couldn’t shake the thought that I was going to be passed. I felt so close to the finish, but this was how bad I was hurting. I emerged from the trails to see my Aunt Vera standing there – excited to see me and running alongside me as the finish line neared. I crossed the finish line in 4:30:16. Good enough for 1st overall female and 8th overall. 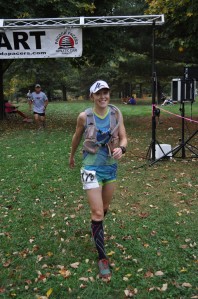 Happy to be finished!

Sore was the only way to describe how I felt after finishing. My legs were aching and I couldn’t seem to give them any relief for a good 1/2 hour after I finished. A testament to my lack of training for this distance. But I was happy with my result for my first 50k, and I am already looking forward to the next one armed with the knowledge and experience I gained this time around.

I was sold on Blues Cruise as being a great first-time 50k. I would have to agree! The organization, the course, the volunteers – all top-notch. The Pagoda Pacers are an amazing group that not only make every single person feel appreciated and special, but they also know how to throw a damn good party! I’m happy to have my first 50k under my belt 🙂