*** Notice***
By reading this race report you hereby agree to remind me of said race report in the event that you see another short distance mountain race on my schedule.

With that out of the way, let’s talk about Loon Mountain Race. 6.6 miles with 3,351 feet of vertical gain, the last kilometer of which hits grades of 40%+. It is intense and challenging – right up my alley! However this year all I could hear in my head was “this isn’t fun.” Perhaps Loon Mountain Race should be a bucket race list and I have checked it off not once, but twice. Enough for me!

I took a shot at this race in 2014 not knowing what I was getting myself into but looking forward to a new challenge. That’s exactly what I got! I placed a disappointing 21st but was hungry to take another shot at it. The need for redemption is always strong in me. In 2016 Loon Mountain Race was again the USATF Mountain Running Championship which meant the field was going to be stacked deep – just as it was in 2014. However this time I decided to throw some specific training into the event in hopes of bettering my position in the final standings. So after 1 week recovery from Cayuga Trails 50 I hopped into a 3 week training plan for a short, intense mountain race. It’s always exciting to throw a different training block into the mix and I was really looking forward to these 3 weeks. My overall run volume did not drop from my lead-up to Cayuga but the intensity increased as well as adding more doubles to the schedule.

After 1 week my training hit a wall much like the one you hit when you make that right-hand turn and face the Upper Walking Boss on Loon Mountain. 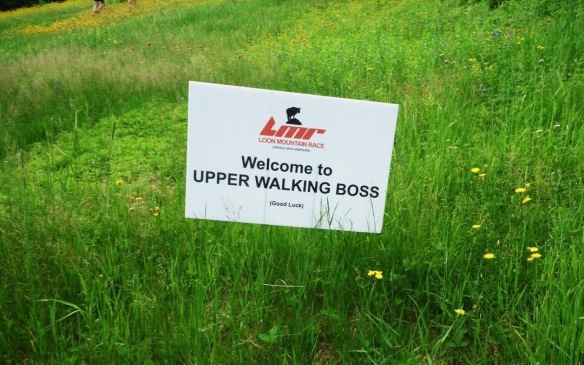 A seemingly minor issue in my lower leg was causing a lot of pain and swelling which would only behave with short, easy, flat runs. Local athlete and ART extraordinaire Scott Field was ready and willing to jump in and provide relief. So much so that I was able to run 2 track workouts the week of the race which turned out to be my fastest track workouts of the year! I found myself itching to race a road 5k instead of a mountain race but I was still excited to give Loon another shot expecting to both race and feel stronger this time around despite the lack of actual hill training in the 2 week lead-up.

I was definitely not in the racing state of mind the morning and felt stressed. I knew I would need to get a decent warm-up in before the start – the climbing begins almost immediately so you better be ready! After about 10 minutes of warming up I felt over-heated and downright exhausted so I headed over to the start line to hang out and wait. Save it all for the race. For me a terrible warmup normally leads to a good race. I was excited to see Katie O’Regan at the start line and it was a relief to hear that someone else had the same goals as me and also the same uncertainty. Neither of us was there to podium – we just wanted to see what we could do. Sayard Tanis also made her appearance to the start line looking primed. It was great to see so many PA runners in the mix!

I had my sights set on top 20 and when the race started that’s exactly where I placed myself in the pack. The first climb felt like we were crawling but was also pretty manageable. In 2014 the women raced a shorter 4 mile course. Turning onto the Nordic Section was new territory for me and turned out to be my favorite part of the course (because it wasn’t totally uphill!) The trail was completely shaded with rollers and a bunch of muddy trenches to run through. Now we’re talking! 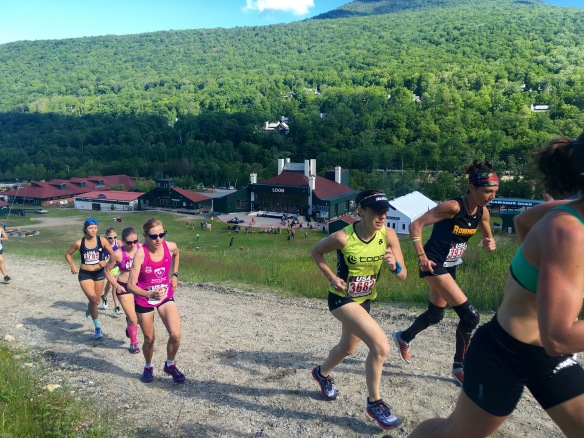 Sayard and I during the first 1/2 mile

Once you pop out of that section you cut across the mountain and prepare to climb for almost the remainder of the race. It was helpful to find markers on the course letting you know how many miles were left. I wore my GPS but never even had a chance to look down at it! With 2 miles to go we rounded a corner where a group of male racers (they started an hour before us this time) were standing to cheer us on. One of them told me I was top 20 but as I started the 2nd hardest climb of the race, Upper Bear Claw, I turned around to see a rather large group of women right behind me. And sure enough the passes started as I was barely moving up that hill. Somehow these climbs felt way tougher than last time even though I felt better equipped to handle them. Wrong!

Finally I reached the gondola where you get some relief before the final, monstrous, Upper Walking Boss. “Haulback” is all downhill from the gondola to the base of the final climb and “haul-ass” is what I did on this section. Even though I knew a top 20 placement was long gone, and after that it didn’t really matter to me where I finished, I still wanted to push. No point in saving my quads so I bombed the hill! And there ahead I saw that final turn where you abruptly face the wall. I knew I would be hiking the whole thing so it was time to put my head down and get it done. My calf felt like it was going to explode at this point and I briefly considered calling it a day here instead of risking damage. On that climb there is no way to approach it gingerly. I immediately realized that was the dumbest thought ever – the Upper Walking Boss is what makes this race epic!

Every time I looked up it hurt just a little more when you cannot see an end in sight. One female had already passed me so I stopped looking up and decided to instead look back. There were a few women behind me but they seemed to be moving at the same pace as I was – can you even call that a “pace”? This motivated me to keep pushing and hold onto my spot. I got really excited to see the “500 meters left” sign only to realize that 500 meters up that mountain meant I was still nowhere near close to the finish 😉 But now we were getting into spectator zone and the guys did a great job at motivating us up that climb! 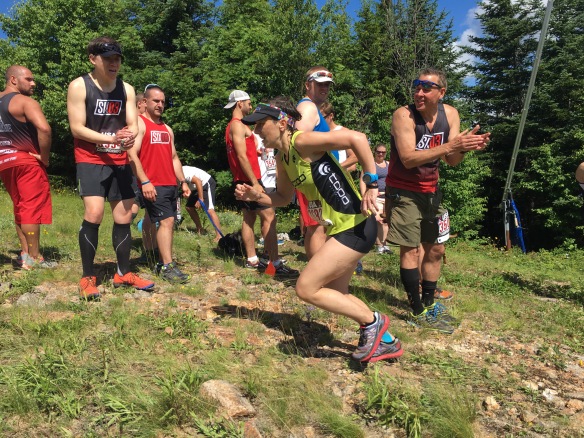 As I drew closer to the finish I looked back one last time to hear one of the guys say “no one’s close – you got this”. Another guy shouted “1:09” in an attempt to get me to push for a sub-1:10 finish. That was just what I needed to hear as I tapped into my empty tank for one last push to the finish. I didn’t have a time goal for the race but having someone motivate me to look up at the clock and inspire me to finish strong was huge. I finished in 1:09:38 which put me in 25th place. Katie hit her goal of top 20 snagging the 20th spot, and Sayard was right with me finishing 27th.

That race downright hurt. Brutal. But it was great to connect with friends I haven’t seen in way too long and I also got to meet fellow Topo athlete Kyle Robidoux. He is beyond amazing! 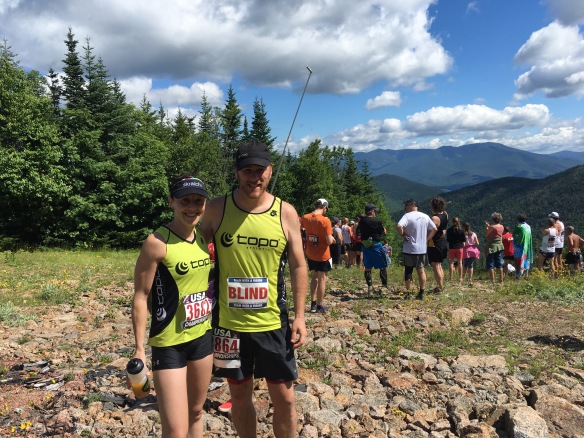 Kyle and I post-race. #topoteam

Now don’t let me scare you away from this race. Loon Mountain is a course you should definitely experience if you’re a mountain-lover. Acidotic Racing does an excellent job organizing and hosting this event. I mean, already by the end of this race report my mind is churning – should I go for redemption on my failed redemption? And this is where I go back to the top of the race report to read it again . 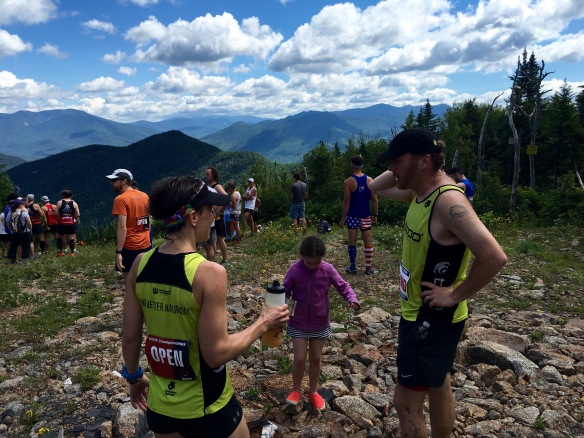 Look at that view!