I’m going to have to apologize up front. I went into this race with the full intention of actually paying attention to the course so that I could provide an accurate description for those who would consider making the well-worth-it trek to the Georgian Bay in Ontario for this North Face Endurance Challenge. However as usual I was lost in my own little wonderland of racing and would have a very hard time recounting what I encountered at any given point in the race. Except for maybe the last 3 miles where around each corner – surprise – let’s climb up the ski slope some more! And then descending the face of the mountain one last time – using every ounce of energy to not come tumbling down. But let’s back it up a little.

The Prep
Friday morning I drove from Syracuse to the Blue Mountain region and I was immediately enchanted by this place. Beautiful rolling terrain, windmills, fields of wild flowers, unicorns. Yes, I’m certain there were unicorns in this picturesque fairy tale land. It had been over a month since my last ultra and to say I was amped to race is an understatement. Once I saw where I would be racing my excitement grew ten-fold. I checked in to my hotel at 6 and heated up my good ol’ pre-race curry while I sat in bed with my course guide fanned out around me. It was time for a cram session! Looped courses make it easy to strategize but this course had no rhyme or reason. At this point all I knew is that I wanted to beat last year’s winning time which was 5:46. So let’s shoot for 5:30! 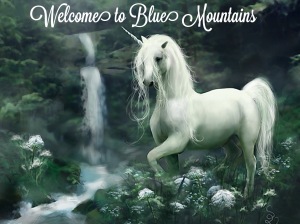 I had the course map, the elevation profile, and the aid station-to-aid station detailed course description in front of me and came up with my plan. I rehearsed the plan over and over in my head. I considered writing it down on my arm – sure I would forget. Nah – I hammered it into my brain – I was ready.

The next morning brought gorgeous sunny skies and perfect temps to start the day. Obviously, I was in magicland! As I lined up at the start I met Anne Bouchard and she definitely looked strong – I needed to watch out for her. Since there was going to be a lot of climbing in the first few miles my plan was to go out easy – always my biggest challenge. Since I was sure Anne was right there with me I hit the first mile at 7:40 and reminded myself, repeatedly, of my plan. And this is about the point where I cannot tell you much about the course.

The Course
Let’s just say it was a steady mix of running across the exposed slopes, running up ski trails, running down ski trails, hopping off ski trails into extremely twisty turny single-track trails through the woods – going up, going down. There were some sections of stone access roads, dirt roads – long straight roads where you could see yet another climb ahead of you. Around mile 7 there was a small cheering section ahead with signs as we made a right turn. When you see a sign that says “Make this hill your bitch” you know you’re in trouble. There were even some sections of paved roads which were nice for opening up your stride a bit. In some of the wooded sections the trail was so soft and the trees were so tall you felt like a small spec floating along. There were some rocky sections, roots, wooden bridges – but not a very technical course. We crossed one small stream, twice. I loved the mix.

The Company
I can’t tell you exactly where I linked up with Matt – it was very early on in the race. I also can’t tell you who came upon whom. But we seemed to fall into sync with each other as we traded on and off leading and we began to chat. His goal was 5:30. Perfect! It was a great distraction as I realized by mile 5 or so that my “rehearsed” plan of how the course was to play out did not at all match what I was experiencing. I don’t know how to explain it really – as the race went on I realized that I actually had no clue of what I would encounter at each chunk of mileage so I threw my plan out the window and just raced! The other perk of running with Matt is that he had pretty extensive knowledge of the course. There was a long section running through very tall grass. My tick-phobia was kicking in big time.

Me: Matt, do you have a tick problem here?
Matt: A what?
Me: Where I’m from I could expect at least 20 ticks on me at this point.
Matt: I’ve never had a tick. Found one on my dog once.

Once?!? This truly is a magical place! No ticks! As a matter of fact, I don’t recall there being any bugs at all. When we reached the halfway point I looked at my watch and asked “the 2nd half is easier than the 1st half right?” He responded with a resounding “yes”. We were well ahead of 5:30 pace and this got me pumped.

Matt and I ran alone for quite some time before Tarzan caught us. Okay his name is Anthony – something I did not know until I looked him up in the results – so during the race he was Tarzan. He was very built for an ultra runner, and the fact that he was shirtless accentuated this. After he passed I was mesmerized by his calf muscles. He was also full of positive energy which made me want to hang on to him. He would occasionally let out a loud whoop, or start clapping, or yell back at us “you guys are doing great – keep it up!” This guy was great! It was also his first 50k – he was obviously having a blast. His goal was top 10 and I was sure he had it in the bag. For a while the 3 of us ran together but they tended to linger at the aid stations when I was prepared to breeze through quickly. I felt a little guilty about this but without any knowledge of where the next female was I had to race my own race. I actually thought about asking for some info at an aid station but decided I didn’t want to know. I’d rather keep racing scared the way I like it.

With about 9 miles to go I took off at the aid station and was feeling really strong so I started to push. This was also sparked by looking at my watch and realizing that sub-5 hours was surely going to happen. On an undulating forest trail I heard that loud shout from Tarzan in the distance and I returned the call. When he caught up to me I could tell that although we were both running strong, we were both struggling with the distance between aid stations in the last few miles. By now the heat was turned up and although there was aid stations o-plenty they seemed so far away. And we were now back on the ski slope with a lot of sun exposure. I kept thinking to myself it would all be downhill from here. Wrong! There were a good 5-6 climbs in the last 3.5 miles. Just when you thought there is no way there can be another climb, you made a right turn into another wall. This was taking it out of me and soon Tarzan was out of view.

I hit that last aid station with one mile to go – the steep downhill… Almost as steep as Loon Mountain’s Upper Walking Boss. After running it at mile 6 of the race I knew what I was in for and tried to hammer down it to the best of my ability. Seeing Tarzan pass a runner on the descent made me want to get one last pass too. And right near the bottom I got it. From there it’s a short shot across the mountain to the finish line. I crossed in 4:46:17 – 1st female and 8th overall. 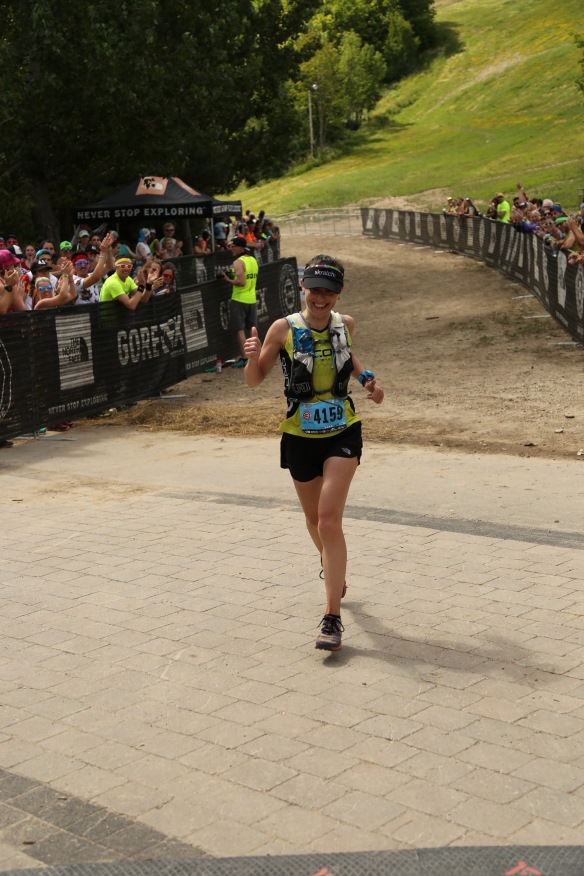 The Hoopla
I have not experienced such a lively finish line outside of World Championship races. A long line of spectators screaming and ringing cowbells made the finish feel amazing! And then of course there was the award ceremony which seemed more like a concert. The crowd was packed tight and deep making it hard for the award winners to get to the stage. We quickly learned what this was about – November Project was in full force at this race as there was a marathon relay event. The top 3 overall males and females were brought up for each event. As their name was announced the crowd would chant their name. Once the podium shots were taken the “crowd surf” chant started and every one of us answered the call. It was a unique experience to end an amazing race day. North Face Endurance Challenge Ontario, I love you. I’m pretty damn sure we’ll meet again.

I may have said it once but I’ll say it again – The North Face Endurance Challenge sure knows how to host a top-notch race event. I’m glad I discovered this race series and can’t wait for the Championship event in December!

P.S. Good luck to Anne who will be heading to UTMB to race CCC – my goal for next year!