Ragnar Cape Cod – May 8th and 9th 2015. What an experience! You would think that being stuck in a van with 6 other people for so many hours without sleep would feel like a never-ending endeavor. It never is. It always flies by in a flash and once we all part ways to go back to our everyday lives we wonder why it had to come to an end so soon. We wish we could be back in that van – in desperate need of a shower, a wholesome hot meal, our beds… just because the experience is so positive, motivating and downright fun. Some of us show up to this event as absolute strangers but we leave as close friends. We’ve shared a powerful experience and although we may all come from different backgrounds we share 2 common passions – running and promoting ethical veganism to both our supporters and the naysayers. And I’d say we do a damn good job at both!

Let’s start with the obvious reasons why this Ragnar event took our cause to a new level of awesome:

We wanted to take over the Cape and we succeeded! There were plenty of comments about how we were everywhere. “How many of you are there?” Our shirts are bold, our attitudes positive and our message clear – anything you can do we can do vegan!

We did have a goal going into this event. Out of the 3 teams we created Team A to include the fastest runners of our group. We wanted to win. The A Team was the last to start – at 1 pm on Friday. In our ~22 hours on the course we passed a LOT of teams – all getting the view of the back of our shirts:

Mission accomplished! Out of 332 Mixed Open (co-ed) teams we were 1st Overall! 3rd overall out of 456 12-person teams, and 4th overall out of 512 total teams (including the ultra teams). As co-captain Scott Spitz pointed out in regards to the team who has the fastest finishing time, “the team consisted of college kids who were not running with the accumulated emotional baggage of divorce, kids, unemployment, employment, etc….so factor in that manner of “life grading”…and we basically won.” 🙂 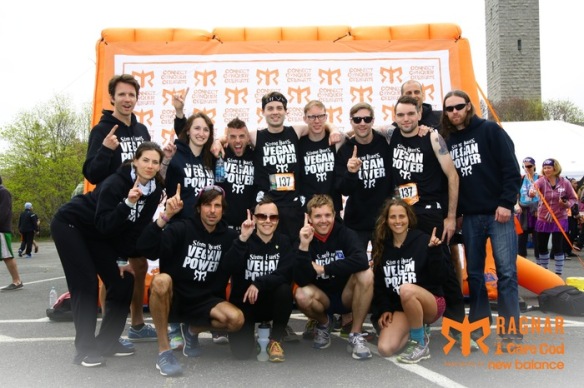 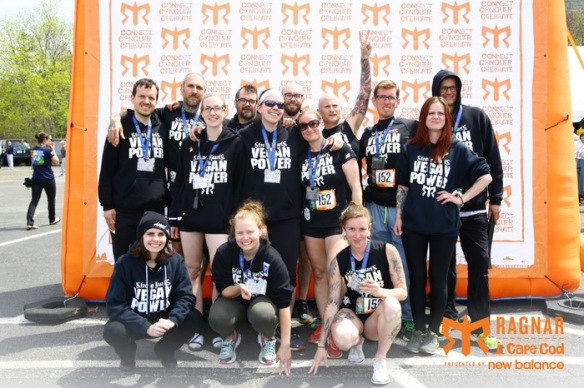 What about the running? Well, I barely remember that part 😉 A whole lot of work was put into making this event happen, and I’ve never been so exhausted before the Ragnar even started! Once we all converged at the Whole Foods in Hingham, MA – the chaos began! Organizing 42 people, tons of food, race gear, binders, etc. into 6 assigned vans was quite the task. It basically looked like a party erupted in that parking lot before the store even opened, and it wasn’t long before the manager of Whole Foods came outside to check it out. He was super-cool and supportive of our efforts, and minutes later emerged with a shopping cart full of cases of water to donate to our cause.

We all made it to the start line with just enough time to get C Team ready for the first start, and our awesome team photo (in the sponsor picture above). One by one each of our 3 teams set off to run 192 miles from Hull to Provincetown, MA. We would only see each other again for a brief time at one of the major exchanges when we all caught up to one another.

Coming into the exchange after my first leg

The real fun started as each of our teams reached the finish line. We were finally able to see everyone again and do some relaxing now that our journey was coming to an end. As each team arrived, we all ran through the finish chute together. It was quite a sight when Team C finished – all 42 of us, and even a few of our awesome vegan volunteers – storming the finish line with the announcer saying “Here come the vegans, surrounded by butterflies. Everyone loves the vegans!”

We placed our mark on the Ragnar Wall before heading out to our meet-up spot to celebrate and hand out awards. 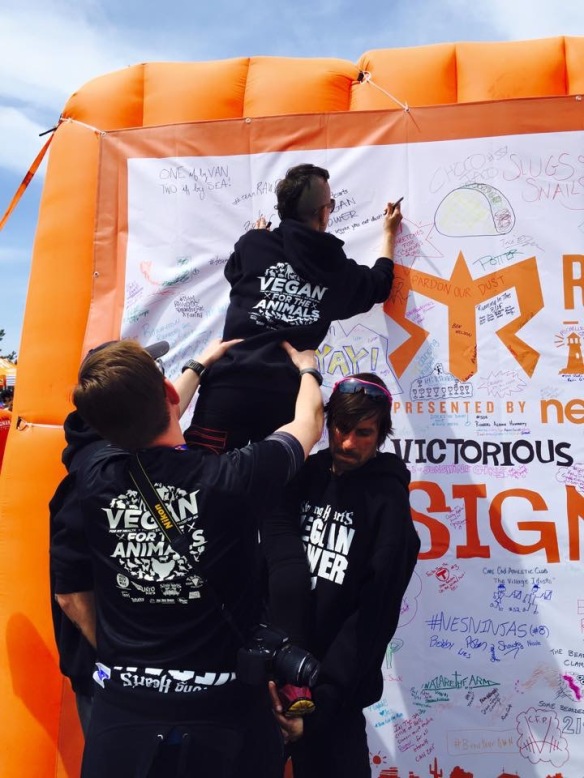 It’s difficult to sum up how awesome this opportunity is for us. We all see the tide turning as more and more people are not only accepting, but praising and seeking information about veganism. One of the greatest things we do at Ragnar (beyond our awesome running) is talk to people. Runners, volunteers, even residents of the towns we pass through see our shirts, our smiling faces, and the fun that we are having. We are often approached by people who want to know more – they want to learn about our cause, why we choose veganism, what we eat. All of our teammates are happy to share our experiences and that is what this is all about. Other vegan runners are excited to see us – they come up and thank us for doing what we’re doing and ask how they can be a part of it.

We rarely hear negative comments or even the ever-so-popular “I love bacon!” Mainly we hear “Go VEGAN!” and “damn those vegans are fast!” I’ll wrap this up with a bit of humor – here are 2 exchanges I learned about through other teammates:

At C Team’s start line:
Announcer: “And here they are with their healthy diet – Vegan Power!”
Skott Daltonic: “It’s more than just a diet man, it’s a lifestyle. Also have you seen me at a vegan bakery before?”

In the shuttle parking lot on the way to the finish line:
A burly member of Team Taekwondo: “If you want to perform like a bull, you have to eat like a bull!”
Alicia Ford: “Yeah but bulls eat grass.”
Burly dude: “Damn, and you are smarter than me too!”

Oh how I love this team!

One last note – we are currently fielding teams for the Ragnar Adirondacks on September 25th and 26th. If you are a vegan runner who wants to be a part of something amazing, please get in touch! If you are a vegan who doesn’t love running, we’re going to need drivers too! We had 6 awesome drivers who were so inspired by this event – they will all be running the next one! Check out our website and our Facebook fan page to keep up-to-date with what we are doing!

And last…check out this awesome video that Chris Cooney, of The Vegan Zombie fame, made during the last few hours of Team A Van 2’s race.

(that’s right, there’s not just 1, but 2 Runners World cover models in this video!)

STRONG HEARTS TO THE FRONT!

Use this referral link for $5 off your order! 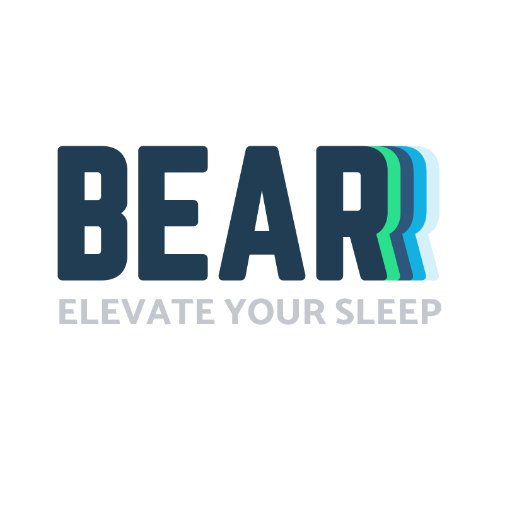 $50 off a new Bear Mattress

Racing my way to fitness is going exactly as I should expect - painful & ugly. That’s life right now. I’m rolling with it.
When the outside temp “feels like” 107, I’m happy I didn’t pack light. #hotellife
This is what I’ve been missing. Last weekend’s Table Rock Trail Challenge - a day on the trails sharing miles, stories, & laughs with friends old & new.
Pain narrows consciousness; pleasure blurs it.